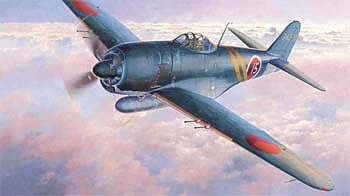 #170 in Plastic Model Airplanes 1/30-1/39 Scale
#1,509 in Plastic Model Airplanes
#6,669 in Plastic Models
"Nice kit. Highly recommended"
nscrfns (Killeen, TX)
Nice detail, especially cockpit. Engine detail is good too but limited view once closed up. Fit is very very good. No flash. Instructions clear and precise. Decals just a tiny bit thick but lay down nicely and very little carrier on edges. Some of Hasegawa's kits are as good or maybe better than Tamiya and Trumpeter. This is one of them. Good value. Highly recommended. You'll enjoy building this.

With the N1K2-J, Kawanishi did the impossible; turning a float plane into a dogfighter that could stand up to the best America had to offer. "George" fighters were quite capable of shooting down Hellcats, Corsairs and, in the hands of expert pilots, even the vaunted B-29 Superfortress. In larger numbers the N1K2-J could have had a massive effect on the war, but only 428 were built. By comparison 12,000 Corsairs, comparable to the N1K2-J, were produced by the U.S