This is a 1/32 scale F4F4 Wildcat plastic model airplane. 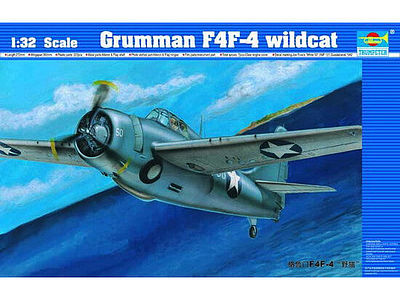 "Wonderful detail"
glh664
So much detail went into this kit. Great fit on parts. Wings are touchy to put together. Engine has great detail. Rubber tires a plus.

#14 in Plastic Model Airplanes 1/30-1/39 Scale
#178 in Plastic Model Airplanes
#1,366 in Plastic Models
"Great Model"
islandtime1988
This F4F4 and the F4F3 Wildcat are my favorite Trumpeter Models I have built.
"Awesome Kit and wonderful Plane"
wgezzi (3410 Provence CT Apt 1 Casper Wyoming 82)
Building this plane was quite the project for me. This plane has things inside that you go...mmmm do I really need to do that no one can see it? Yes, you do LOL...The instructions are really good and it was a true pleasure to build. I have made this plane for my grandson he picked the color of this item and I think it looks great. OK, here is the one thing that really bothered me was how the items are in the frame...they come off easy enough but there is a lot to shave off. instead of using my #11 blade I had to get a flat blade to come down on the parts that were left after cutting off the frame. For me building this model there was a couple of places that I needed to fill in. Very small and makes it look so much better. If you like detail this is indeed a model for you!!!
"The Best F4F Wildcat Model!"
rxdeanna
The best and first F4F Wildcat model I've ever built.

At the onset of the Pacific War in December 1941, the Japanese Navy A6M Zero fighter was the dominant aircraft successful against the allied air forces. The Zero's attempt at total superiority was thwarted by numerous F4F Wildcat fighters flown from U.S. aircraft carriers. Introduced in 1942, during the critical stages of the Pacific War, the F4F-4 was an improved version of Grumman's Wildcat carrier based fighter. This new version, with folding wings and six wing mounted .50 caliber machine guns, plus a more powerful 1,200HP Pratt & Whitney R-1830-36 Twin Wasp engine broke the dominance of the Japanese Zero. Grumman became known as the "Ironworks" due to its strongly designed airplanes which could absorb tremendous punishment and still fly home. Although the Wildcat was inferior to the Zero in many respects, a superb kill ratio was attained by Wildcat pilots by using its strong points against the Zero's weak points of fragility and unseasoned pilots.