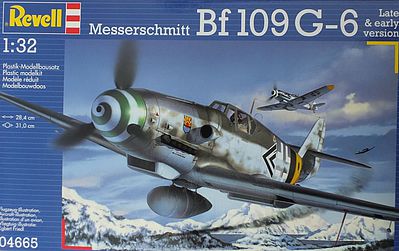 "Messerschmitt BF109G6 Fighter"
skippykeesler (Edwardsville ILL)
This is a new tool offering of the BF109G6 from Revell of Germany. Overall detail is excellent,especially in the cockpit and wheel wells. The kit offers finely engraved panel lines, but little if any rivet detail. Cowling fastnes are very nicely depicted. The kit offers parts to build a early or late production G6. The flaps and slats may be displayed open/down or retracted. The oil coolers may be built open or closed. 2 different styles of wheels and tires are provided, and are some of the finest injection moulded wheels I have ever seen. The seat comes with moulded in seat belts and shoulder harnesses. These should look good if painted and dry brushed well. If you wish to install PE belts you will have to sand the moulded ones off. The decals are excellent, lacking only the swastika for the tail. The instrument panel decal is good, or you can opt for the Eduard BF 109G6 photo etch cockpit detail set. Markings are provided for 2 aircraft. The paint callouts are the usual Revell Germany, mix this with that, though on the back of the instruction sheet both camo schemes are called out in RLM colors. This is a very nice model of the 109G that goes toghether well , and will not break your piggy bank in the process. It offers much value for the money. I would highly recommend this kit.

#1 in Plastic Model Airplanes 1/30-1/39 Scale
#8 in Plastic Model Airplanes
#75 in Plastic Models
"Great plane"
jeremy.s.michels1
This is a great kit. The instructions were easy to follow and the parts had very little flash and fit together very well. This is a nice price for a 1/32 airplane. The kit is full of details but there's room for extra detail. I highly recommend this kit to anyone.
"Challenger"
jimwoodward1943 (Broken Arrow, OK)
Definitely skill level 5 - tiny parts and decals - and at my age some decals are hard to see
"Value, value, value!"
daveisserb
In purchasing this kit, around $25.00 with a fraction of shipping included, I had limited expectations. The complete boxed model had an surprising weight, the contents explained the mass. The kit has a crazy amount of pieces with many options to choose from. The detailing is acceptable, however, price adjusted quality is outstanding. There is some flashing of note, with the 1:32 scale it's an easy fix. The directions are easy to understand and thorough for an enjoyable build. The steps and sub assemblies went together with only reasonable effort needed and required minimal filler and light shaping. For the price, the value is almost, almost unbelievable. Give it as a gift to an younger modeler or assemble it yourself, the money will be well spent.

The Bf109 is one of the Luftwaffe's most famous World War II fighter aircraft. More than 33,000 Bf109's were built in many different versions. Both its climbing capability and acceleration in the dive were two of the Bf109s strong points. In production since the summer of 1942, the Bf109G series displayed some noticeable changes compared with the previous Bf109F version. The G-5/G-6 had a MK 151/20 mm cannon firing through the engine. Two MG 131 machine guns were installed above the engine. The belt-feed to the uprated armament necessitated aerodynamic modifications to the engine cowling's which gave the aircraft its characteristic bumps .

The G-6 was used extensively on all fronts from March 1943 until the end of the war. Later production lots of the Bf109 G-6 were given fixed rear cab windows in a one-piece design which vastly improved visibility to the rear. During a further modification the tail was fitted with a rudder that was higher and had a larger area than previous models. With a total of 13000 units, the G-6 was the most widely produced of all Bf109's.

One decal sheet with markings for two aircraft