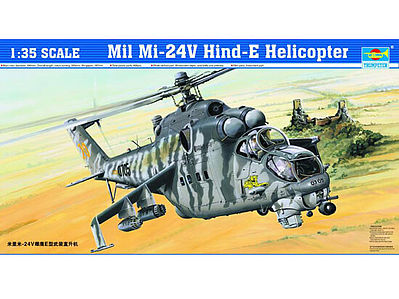 "Initial review of the mighty Hind Gunship"
somnus78 (Whidbey Island)
Great kit. Absolutely huge. Tons of weapons options for loadouts. The photo etched parts package is heavy, weighs almost as much as an entire medium sized sprue. Extremely detailed and very very sturdy. The fuselage is full length in two halves so the model will be very strong. As usual, in all my reviews, the sprues are thick and the resin is strong so use snips to cut the pieces out. Beginners bending the parts til they break out will have a lot of filling to do. I wish the canopies were made a little better though. They're all clear and one piece so you'll have to paint the canopy structural frames on the clear plastic. Very meticulous sanding and painting. Although, if each glass piece would have to be glued in, it would be equally meticulous. Still, the iconic dual bubble canopy looks great!!

#31 in Plastic Model Helicopters
#412 in Plastic Model Airplanes
#2,614 in Plastic Models
"Trumpeter 1/35 Mi-24"
mooniemac2000
A huge kit measuring nearly 2 feet in length. Photo etch and clear parts for the instrument panel are included among other things such as a very full load out of options for ordnance. Fully inscribed and engraved panel lines. There are also complete decals and stencils
"Great Kit"
ofthesun5615
Excellent kit very good cockpit and engine detail.Panel lines crisp and cockpit glass just needed a seam polished down- slight distortion in clear domed cockpit.Great weapons loadout. Landing gear choices for in-flight or on the ground (compressed) which I liked. Takes some care getting all the gubbins in the fueselage and, for me, a bit of putty. Photo-etch was helpful but I found a bit difficult for the fueselage doors.Highly recommended kit it looks great in the 1/35 scale.

Mi-24V / Mi-35 "Hind E" Mi-24V (Hind-E) is another improved version, a development of Mi-24D. The major change consists in the upgraded and more efficient SHTURM - V missile system with 9M114 (AT-6 Spiral) radio-guided anti-tank missiles launched from two pairs of cylindrical pods mounted on wingtips. Also added were B-8V rocket pods for 20 80 mm S-8 rockets, UPK-23-250 pods with two-barrel Gsh-23L and 250 rounds, GUV9A universal pods which can carry a 30 mm 9-A-800 automatic grenade launcher, or one 12.7 mm 9-A-624 four-barrel machine gun and two four-barrel 7.62 mm 9-A-622 machine guns. It was equipped with TV3-117V engines with improved height characteristics and optional exhaust mixer boxes to cool exhaust gasses, and auxiliary fuel tanks with a capacity of 450 litres. Since the War in Afghanistan, Mi-24Vs received radar homing and warning system (RHAWS), infra-red countermeasures (IRCM) and an active IRCM jammer. These equipments were also fitted to some late Mi-24Ds, which have sometimes been referred to as Hind Ds Mod. The degraded version exported outside the Warsaw Pact was called Mi-35.