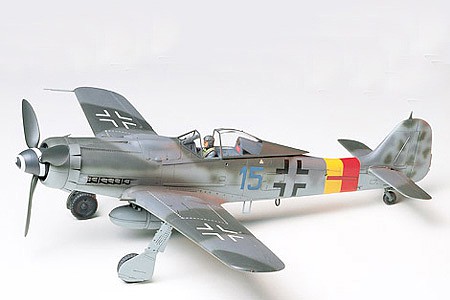 #35 in Plastic Model Airplanes 1/40-1/49 Scale
#88 in Plastic Model Airplanes
#681 in Plastic Models
"This completed kit looks terrific"
dmansfield001
This Focke-Wulf Fw190-D-9 Model Kit by Tamiya arrived in excellent condition with no visible flash on any of the components. The detail on each piece is very nice and the decals are quite extensive for four variations and all inclusive. As with allof the Tamiya kits I've built thus far, the instructions are nicely illustrated and clearly written. The fit-up of parts was very good requiring minimal use of filler. This completed kit looks terrific.
"FW190 D-9"
stevenarmstrong1952
This is a good version of the Focke-Wulf 190 aircraft. It will make a nice addition to my collection.
"Standard Older Tamiya"
TWA
This kit is in every a standard older Tamiya kit. It has a very low parts count, builds quickly and cleanly, and manages to fit quite a few details in. One thing to note, though- it is fairly common knowledge that this is far from the most accurate D-9 in 1/48 scale. Minor mod's include removing an ejection port in the nose area, and grinding out the sides of the the landing gear wheel wells. If there is one simple fix everyone who builds this model would stand to benefit from, you should shave off the little nubs of landing gear indicators on the upper wing. These are far too small. I cut mine off, and redid them with stretched sprue at the correct height, which added some interesting color to the model. The fit of the kit is fine, with minimal flash throughout. I had a pretty noticeable fit problem where the nose connects to the leading edge of the wing, but a littler putty and some shaping with a knife sorted that out fine. If you are really looking to make it accurate, a resin correction set for the nose and some way of lengthening the landing gear would be required. The only difficulty with the kit comes from the decals- again, a standard Tamiya kit. Though very well printed, they were thick, didn't want to leave the backing paper, and are prone to silvering. Liberal use of Tamiya's Markfit decal setting solutions are just about the only thing that'll get these to lay down. Overall, it's a perfectly competent kit, if you want a simple, easy to build Dora on the shelf. If you are wanting total accuracy, though, the Eduard one is probably the better option.

Following the successful entry of the Focke-Wulf Fw190A series of fighter aircraft over the English channel during the autumn of 1941, the German RLM requested high altitude version to complement the fighter fleet, and three projects were started. The Fw 190B used the B.M.W. 801 turbosupercharged radial engine and a pressurized cockpit, but very few of these were built.

The Fw190C was powered by a 1,750hp Daimler Benz DB603A in-line engine, of which three prototypes were built. The third high altitude project was based on the Focke Wulf Fw190A airframe and powered by a Junkers engine. The fuselage was lengthened to accommodate the V-12 cylinder, liquid cooled, 1,750hp Jumo 213 engine, and made its initial flight during the winter of 1941 - 42. Five further prototypes were produced, plus small batch of Fw 190 D-Os were completed from standard production Fw 190A-7 airframes. These pre-production aircraft were followed by the Fw190 D-2 through D-8 designations.

The Fw 190D-9 began production in June 1944, with early versions having the flat topped canopy, and from W. Nr. 210002 onwards having the Galland hood (blown canopy). It went into combat with the III/JG 54 "Grunherz" (Green Hearts) in September 1944, at Achmer, Germany, as top cover for the new Messerschmitt Me262 Jet fighters then entering service.