This is the 1/144 scale Concorde British Air plastic model airplane kit by Revell. 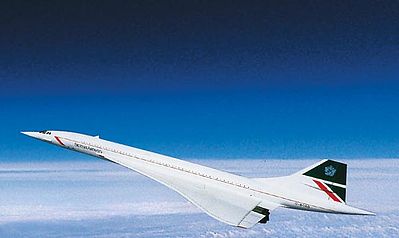 ","
flykic305
awesome kit fully loaded with details to the max..

#7 in Plastic Model Airplanes 1/100-1/199 Scale
#86 in Plastic Model Airplanes
#756 in Plastic Models
"Good"
mtank6261
This was a fairly easy model to assemble and looks good when completed. Comes with several decal options.
"Most satisfying, highly recommended"
ahsing (SF Bay Area, CA)
There is no question the Concorde is a thing of beauty. For 1/144 scale, this one is surprising in fit quality. The Concorde has a very narrow fuselage (same as a Boeing 737). Everything fits. The decals are plenty, and fantastic, the British Airways tail decal wraps around the tail bulges and actually sticks to it, surprise! The windows are extremely small (it's the correct size), use a fine point sharpie black to accentuate them. One of my most satisfying builts in Civilian aircraft in 1/144.
"Best Concorde available"
blawhorne99
This kid came out after the Heller and airfix kits. It has better detail. The lines are assessed, and the fit is much better. Revell does skip out on some nearby details, but that's really the only complaint. Still an amazing airplane, Revell does this beauty Justice

The Concorde is one of the most famous airliners in service today thanks to the fact that it is the only one capable of cruising at supersonic speeds. A product of cooperation between the British Aircraft Corporation and the French Aerospatiale company, Concorde first flew in March 1969. The first passenger flights occurred in 1976 and today Concorde primarily operates on transatlantic routes between New York and London or Paris, and Middle East routes. Concorde is powered by four afterburning Rolls Royce Olympus 593 engines and can fly at over twice the speed of sound. This 1/144th scale Revell -Germany kit includes markings for British Airways and Air France - Concorde's only operators.