This is a plastic model kit of a 1/48 Grumman F4F-4 Wildcat by Tamiya. 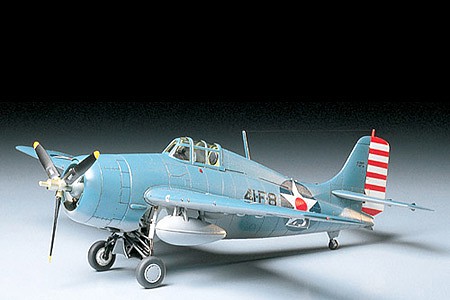 "Best Wildcat available in 48th scale."
convairb58
I posted the photo of the F4F-4 in Pug Sutherland's markings. The F4F Wildcat was sort of a seminal event in Tamiya's history since it marked the first WWII Navy subject since their F2A Buffalo (which despite its age is still a very nice kit). I think the molds are close to 20 years old or so, but its still the best Wildcat out there. While the choice of versions is rather restrictive (i.e., only the F4F-4 or with a little modification, the FM-1), it is a delight to build. The parts for the most part fit very well. Tamiya has captured the intricate look of the hand-cranked undercarriage and while it looks fiddly to put together, was really not all that bad. The powerplant, just like on their Corsair, is modular in design and very easy to paint. The kit canopy, while clear is a little bit on the thick side and best replaced with a Squadron clear wax or Rob Taurus canopy if you want to depict the canopy slid back. Cockpit detail, even out of the box is very good. There are also lots of aftermarket products available for the cockpit if one wishes. Vector/ Ultracast also has FM-2 conversions as well as some very nice aftermarket wheels available. straightening The actual F4F was covered with a lot of raised head rivets, which Tamiya has depicted. This can cut both ways from a model building standpoint. If you are building a camouflaged F4F and use contemporary painting techniques (e.g., washes) the rivets will appear oversized. Because of that i sanded all of the raised rivets from my model. However, those of you with plans to do a pre-war, silver painted F4F would be better served by leaving them on, since those planes were meticulously cared for anyway. Its a shame Tamiya didn't choose to expand the Wildcat series with an F4F-3, FM-2 or the British/ french/ Greek versions. While those versions are catered for by HobbyBoss, their execution overall is a bit more complicated. My suggestion would be to take this kit on before starting the Tamiya Corsair; It's a good warm-up. The Tamiya kit captures the clunky, pugnacious, transitional in-between-a biplane-and-a-monoplane look of the sturdy and reliable Wildcat. Highly recommended.

#12 in Plastic Model Airplanes 1/40-1/49 Scale
#26 in Plastic Model Airplanes
#204 in Plastic Models
"A real Tamiya gem"
jimmbbo
The Tamiya F4F has been the standard Wildcat of the industry since it was first released. It is accurate in outline and detail, and goes together beautifully... the fit is superb, and with some aftermarket bits, an experienced modeler can be turned it into a real stunner. While it could be built as a first or second model, it is more applicable to someone with a few models built.
"Great kit of the Grumman Wildcat"
rockykeele (Tucson, AZ)
I really like Tamiya kits, and the F4F Wildcat is no exception. The kit went together flawlessly, with the usual Tamiya quality. I like how the outer wheel part is separate from the tire, making painting of the rim easy. The engine detail is pretty nice, and with some careful painting it turned out very nice. The canopy comes in two pieces so you can pose it open or closed. The cockpit has some nice detail that with a wash and some drybrushing stands out nicely. The only small complaint that I have is that the instructions for attaching the main gear doors are a bit unclear. The kit offers 4 sets of decal markings; Three navy planes and one Marine. I needed to use decal set, especially on the large stars on the fuselage - Otherwise the fit of the decals along the curvature will not be good. Overall, a very fun kit.
"Pleasure to build"
jc (Missouri)
This is a great little kit that goes together quite well. No putty was required and very little sanding to get rid of seams. It's older so not as detailed as newer releases but still a worthwhile kit to have in your collection. I will certainly build this again most likely two more times to build the other two versions detailed in the kit. But other kits are in line ahead of that so it will have to wait.

At the onset of the Pacific War in December 1941, the Japanese Navy A6M Zero fighter was the dominant aircraft successful against the allied air forces. The Zero's attempt at total superiority was thwarted by numerous F4F Wildcat fighters flown from U.S. aircraft carriers.

Grumman Aviation produced the G-18, the prototype XF4F-2, which first flew in September 1937. Initial evaluation revealed several performance problems, which led the U.S. Navy to reject the G-18 in favor of the Brewster's F2A "Buffalo". The Navy asked Grumman to continue with the project, and resulted in the G-36, which flew in February 1939. The G-36 tests exceeded the performance of the F2A, resulting in the U.S. Navy approving the design and ordering it into production as the F4F-3 Wildcat. Two yeas following its deployment, during the critical stages of the Pacific War in 1942, the improved F4F-4 Wildcat was introduced. It had folding wings, and three 12.7mm machine guns in each wing, plus the more powerful 1,200 P & W R-1830-86 Twin Wasp engine, giving it a speed of 512km/h. Grumman became known as the "Ironworks" due to its strongly designed aircraft, which could absorb enormous punishment and still fly home.

Although the F4F was inferior in many respects to the Zero, a superb kill ration was attained by Wildcat pilots by using its strong points against the Zero's weak point of fragility and unseasoned pilots.