This is a plastic model kit of a 1/48 Scale Douglas A-1J Skyraider USAF by Tamiya. 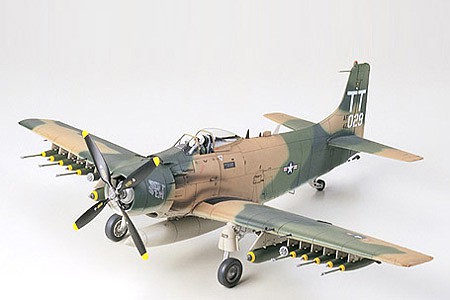 "Plastic Model Aircraft"
w3158823
In 1968 the RVN Airforce and US Airforce were flying these (I do not believe it was the J model) for close air support. As a Gunship Pilot I had the mission of acting as forward air support for directing bombing and strafing runs. This is one of my builds. The manufacturer of this product faithfully reproduce the kit. Instructions are easy to follow and makes an enjoyable build,

#27 in Plastic Model Airplanes 1/40-1/49 Scale
#58 in Plastic Model Airplanes
#519 in Plastic Models
"Superior Skyraider"
kajoe55 (Oklahoma)
Tamiya’s 1/48 scale A-1J is a great kit. Most modelers know Tamiya makes kits where the parts fit well together, decals are good quality, detailing is superb, instructions are easy to follow, and the instructions give a clear call out on paint color. This kit is no exception. The model went together with no issues and included many different stores of weapons to choose from. It has recessed lines so if you have been working with older kits, you can enjoy the final product as is without wishing you had sanded down the raised panel lines and re-scribed. This model is the U.S. Air Force version (Tamiya also makes a Navy version as well) and represents the Sandy of rescue/special operations fame. If you like Vietnam War aircraft, this one is a must and you won’t be disappointed with the final result. Well worth the cost. I highly encourage this kit for modelers of all skill levels. Enjoy and have fun.
"Very good Skyraider kit!!"
aj4grade
This model is well done. The kit comes with detailed instructions for assembly and are well done. This model can be built in many ways. There are no major flaws with the kit, the only suggestion would be to research cockpit interiors for detailing the cockpit on the model. Otherwise, this is a very straightforward kit that builds into a great aircraft. The paints are called out only in tamiya but, there are other paints that are similar to the tamiya callouts. I recommend the kit for any builder.
"Best of the breed"
j w bolen (Ohio)
Best A1 model I have found. Great fit, no flash. You would do better painting the ordinance going off pictures from the net rather than trying to figure out the paint guides. Example I have seen the rocket pods in different colors so you need to check if you are doing a particular plane. Big plus is that it comes with Vietnam era munitions and lots of it I will be using some of the ordinance on other A1s .. I has the submunitions dispensers ( the tube like items) that I have not found anywhere else I did not use the decals so I cannot judge them , they look correct. Usual Tamiya quality

Also going by the names Dauntless II, AD, A-1 Able Dog, and Spad, the Douglas Skyraider saw almost 30 years of service. The Skyraider's development started in June 1944. Not completed in time for WWII, its first combat came with the outbreak of the Korean War in June 1950. The first production version to roll out of the Douglas factory was designated the AD-1. Twelve years and seven versions later, over 3200 Skyraiders had been produced.

Among those, the AD-6 version, also known as "Able Dog Six", was produced in the greatest numbers. The next and final version of the Skyraider, the AD-7, was extremely identical to the AD-6, but it had reinforced wing spars and wing fittings, as well as the strongest landing gear of all the variants. The AD-7 housed the new wright R-3350-26WB engine, which enabled a top speed of 285 knots. Due to a directive to standardize the designation of Navy and Air Force aircraft, AD-6 and AD-7 became known as A-1H and A-1J respectively.

In 1965, when U.S. air operations in Vietnam became more aggressive, literally hundreds of Skyraiders, including the A-1J, were deployed to the 14th and 56th Special Operations Wings (SOW). Armed with Mk.82 and Mk.117 bombs, 20mm wing-mounted cannons, and rocket launchers, the Skyraiders were used in a wide variety of combat missions.