Keep calm ... Hobby on. Please be patient during this time. We are open, but orders may be delayed unexpectedly.
> Plastic Models > Airplanes > 1/40-1/49 Scale : Trumpeter C-47A Skytrain Military Transport Aircraft tsm02828 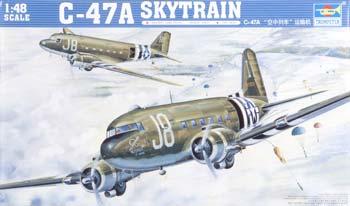 "Don't Forget the Royal Air Force"
johncpo41 (www.hobbiesinabarn)
I built this kit many years ago and with the best intentions of having a D-Day invasion version. The first problems were with the decals which I would recommend to be after market. The kit decals peeled after about a year and as of today I completely changed the whole aircraft decal sets into RAF as a plainly marked version without the invasion markings. After care research of actual aircraft I noted the fact that many marking existed during WW2 and I set off to improve the model's look to some degree and received many Likes and good comments from a group that follows this aircraft and any models and photos. I would highly recommend the kit to anyone for the simplicity of construction but be forewarned that the wingspan is 24 inches. But the wings are removable which is a redeeming feature. So be ready to get after market decals or use ones you might have in your extra box as I did. I even had markings for making a plane from Portugal.

Actual model may vary from image on box Due to many small parts that could become a choking hazard, please keep away from children 3 years of age and younger.