This is a plastic model kit of a 1/48 Scale Bristol Beaufighter VI by Tamiya. 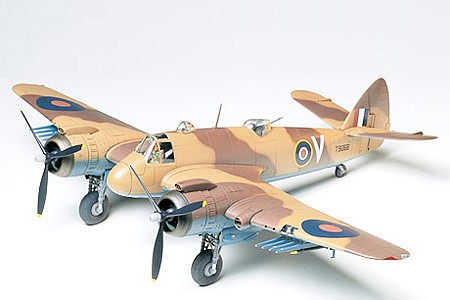 "A real thing of beauty"
jimwoodward1943 (Broken Arrow, OK)
All parts fit very well and there was minimal flashing. The directions were very clear. The tool and die makers at Tamiya are experts when it comes to die making. I enjoyed the ease with which the many parts fit together. Tamiya kits are hard to beat when it comes to craftsmanship

#79 in Plastic Model Airplanes 1/40-1/49 Scale
#239 in Plastic Model Airplanes
#1,924 in Plastic Models
"Beaufighter Flies Again"
gwfabian
This kit was a breeze to build. Not that many parts and the moulding was flash-free and had a good deal of detail. Everything fit together very well. In fact, some parts fit so well that I didn't use glue. The canopy, for example, snaps onto the fuselage and stays in place without glue. The main landing gear struts are made of four parts and it can be a bit of a challenge to assemble them, but they snap right into the wheel bays, which snap into the engine nacelles. You can easily leave them off the model until you're finished painting. Clear parts were clear and had sufficient frame detail. There's parts for building two different kinds of Beaufighters - a night fighter (which I did) and ground attack version with rockets. You may be disappointed with the interior details, but they're actually overkill. Once the fuselage goes together, only the cockpit and the space behind the pilot's seat in front of the bulkhead separating the observer's station are visible. From the observer's side, you can only see his seat, so you need not spend too much time painting those areas, especially if you glue the observer's hatch shut like I did. The Beaufighter is one of my favorite WWII airplanes and this kit does it justice.
"Bristol's Beast"
Jeff
Another magnificent model from Tamiya. This kit makes up to a large size and looks fantastic. Construction was fairly straight forward with the instructions being well laid out and simple to follow. As always, one must decide prior to construction which version is being built as different parts are used and varying openings must be made in the wings, nose and fuselage. The pieces fit together quite nicely and the cockpit subassembly fits beautifully in the fuselage. The cockpit subassembly in a small model unto itself and it is a shame that so much of the work disappears when the fuselage halves are joined. In hindsight I wish I had purchased aftermarket seat belts at a minimum as they would have added nicely to what can be seen in the cockpit. The cockpit canopy is a slick piece as at overlaps the top edges of the fuselage and this makes for a very clean joining without gaps. The landing gear assemblies are rock solid and easy to assemble. Each assembly box fits snuggly into the wheel wells and one can wait till the very end of the construction before cementing them in place. This is very helpful if an airbrush is to be used to paint the model. The deeply recessed engines fit great into the cowls and there should be more than enough detail in them for all except for the most fastidious of modellers. The exhaust is fairly detailed and once again I adjusted the construction sequence leaving the exhaust pipes off until the painting of the model was complete. One area where some surgery is required is on the elevators. Tamiya has mistakenly put the elevator actuator arms and fairing on the top of the tailplanes. This is wrong and they need to be relocated on the bottom. This requires a sharp knife and a steady hand to cut away the offending mouldings and some scratch building of the new units to be installed along the bottom of the tailplanes. There are plenty of photos around the internet or in books to assist one in proper placement of the items as well as some idea of what they should look like. I suspect that if you leave the tailplanes as they are manufactured, very few people if any will notice. The clear parts of the kit fit great. I did buy commercial masks to assist in painting and would recommend this. The decal sheet is excellent and allows you three different markings. I chose to do my ship as as one from 96 Squadron, RAF. There are plenty of aftermarket choices as well if you wish to explore that option. Overall I used putty along the wing/fuselage joints and a bit in the port wing leading edge as well a a bit in the tail to fuselage joint. Not too bad considering the size of this aircraft and easy to do. I have scored this an excellent model overall with the most serious issue being the actuator arms issue which is really not to bad to fix. Tamiya's Bristol Beaufighter was a lot of fun to make up and I put somewhere in the area of 35 hours into mine so the cost of this kit when broken down into the number of hours of fun it provides it is a very worthwhile purchase. I give this model an 8.5 out of ten and have to hesitancy in recommending it to others who are looking for something a bit different to display on their shelf. Cheers, Jeff
"quality kit"
j w bolen (Ohio)
Agree with the raves about this kit. Fit is great. Did one as a USAAF nightfighter. Plane did not get the publicity of the Mosquito but served in some of the same roles. plus as a torpedo bomber, That is done as a separate kit. Price is good for what you get. Plan on doing more of them. I have hoped kit would be reissued with other marking to I would not have to hunt up the Australian ones.

Bristrol's "Beaufighter" was one of the most successful and widely used twin engines fighter types during WW2. The first series production Beaufighter MK.1 entered service in September 1940. With its four nose-mounted 20mm cannons and six 7.7mm machine guns in the wings, this stub-nosed fighter became the most heavily armed aircraft in service with the RAF during the war.

As the German Luftwaffe eventually turned to night bombing in autumn of 1940, priority was put on night fighters and the first operational Beaufighters were fitted with the Airborne Interception (AI) radar, which designated the Mk.1F (F was suffix for Fighter Command). Meanwhile, its rugged construction was thought ideal for long range fighting and escort duties, and the Mk.1C under the Coastal Command became ready for initial operations in late March 1941. Introduction of the more powerful, 1,670hp Hercules VI engines by late 1941 resulted in the Mk.VI. A 7.7mm machine gun being added in the observers canopy for rearward defense, and the horizontal tail plane was modified to have a 12 degree of dihedral, to eliminate the unstable characteristics observed on the preceding types.

The Beaufighters saw active service not only above Europe but also in the Mediterranean, North Africa, Middle East and Pacific area. More than 5,900 Beaufighters of various types were produced.