A plane which since July 1932 the Nakajima Aircraft Mfg. Company had designed and manufactured for trial under the name of KI-84 was officially adopted in April 1944 by the Army as the Fighter Type 4 "Hayate" and the mass production was started. The number of the Hayate produced by the end of World War II totaled about 3,500 which ranks next to that of the Zero and the Hayabusa but is the largest in the Japanese aircraft history in view of the number produced in about a year. The performance of the Hayate was equal to, or higher than that of the Allies' fighters of those days. This was the first fighter worthy of the name having excellent speed (climbing ability), firepower and maneuverability that became available to the Army. Those days when Japan feared she might lose the command of the air even over Japan proper, the Hayate called "the Decisive fighter to turn the fate of the Greater East Asia" was accepted by fighter units with hopes as a new fighter to beat enemy combat planes. It made its first campaign over Central China as a member of the 22nd Air Flotilla. 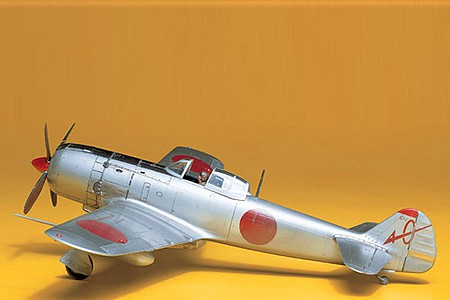 "Nice, simple kit of sleek Japanese fighter"
rockykeele (Tucson, AZ)
Tamiya's Havate Frank is a simple, but nice, kit of one of the fastest fighters of WWII. Part count is low and interior detail is a bit simplistic, but the kit builds up into a nice representation for minimal cost. The kit features mostly raised panel lines, with a few engraved lines around the control surfaces. Cleanup was minimal, with only a few ejector pin marks that needed filing. The kit comes with markings for five or six different planes. Some of these are home defense planes, some are foreign occupation planes. Paint schemes range from silver overall, to dark green on top and light blue, or blueish gray underneath. The few decals were on the thick side, and it took several applications of solvaset before they settled down around panel lines. There is a seated pilot as well as a standing pilot, so that was a nice touch. The canopy comes in three pieces and you have the option of leaving it open, or of closing it up. Overall, I would recommend the kit to anyone that is looking for a simple, but fun build with nice quality parts all around.

#19 in Plastic Model Airplanes 1/40-1/49 Scale
#41 in Plastic Model Airplanes
#365 in Plastic Models
"Decals are great!"
mcgoldrickkelly
Not only i this another example that Tamiya is possibly the tops in the model airplane business, but the decal sheet is the best ive seen for any plane YET! There are enough decals for three different versions, which includes enough red sun decals for three versions! So, when my zero red suns kinda failed on me, I used red suns from the Frank. Then used them on my Frank and STILL have enough leftoveer for another Japnese fighter if anything goes wrong! As for the model itself, its perfect, no gaps, limited scraping and sanding, if any, and paint schemes are great. Pics to come!
"Excellent Kit"
johncpo41 (www.hobbiesinabarn)
I have built many Japanese aircraft models, mostly the Zero and wanted another aircraft in my collection, the Frank made the connection with all the other models. Easily put together and with no parts issues I went through the kit in about a full day of building and painting. The instructions are very clear and there is no dye flash to bother with the overall kit. This is a great addition as are all the kits of Japanese aircraft I have entered on here today.
"Tamiya Frank 1/48"
ek19333
This is one sweet little kit and one that I greatly enjoyed making. There was very little flash on the parts, and for a very inexpensive kit it was very detailed. Parts fit very well with only minor adjustments. The only putty I used were on the fuselage/wing seams and these seams sanded down very nicely with a sheet of sandpaper and a little concentration. As noted in other reviews, the decals that come with this kit are excellent in their range....also, the decals were extremely easy to apply. All in all, this is one very nice little kit with a great amount of detail, ease of assembly and a great price tag.