Heinkel HE162 A2 Salamander

This is a plastic model kit of a 1/48 Scale Heinkel HE162 A2 Salamander by Tamiya. 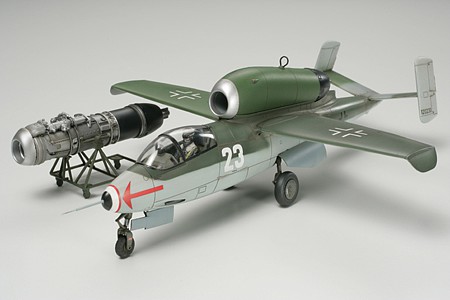 "Tamyia Heinkel HE162 A2 Salamander"
Fritz M
This plastic model airplane truly embodies the incredible engineering in this German plane, which was way ahead of it's time. The model itself is detailed and fits together nicely. The finished product is amazing, and with more than one decal configurations, you can chose any way you want the plane to look.

#92 in Plastic Model Airplanes 1/40-1/49 Scale
#300 in Plastic Model Airplanes
#2,279 in Plastic Models
"Fun"
snod
This kit was given to me for X-Mas from my kids. I found it to be fun to build with a lot of options. Tamiya quality and fit was up to their best standards. PRO'S First you have to decide if you want the engine on the engine stand or in the aircraft. If you decide to put the engine on the aircraft, then you can leave the engine nacelles open or closed. I put the engine on the stand and left the nacelles closed. If you chose this, it still gives you the parts to make it look like a complete engine is inside of the plane. All the parts went together perfect. A weight is also included to keep the nose down. The instructions are clear with great paint references. Decals went on excellent with a lot of them for such a little plane. Five different squadrons to choice from. Wish every kit came with a complete engine to mount on a stand. You can see so much more of the engine, then inside of the plane. A lot of small parts with great detail so I would recommend a average builder, not for a beginner. CON'S None
"Faithful reproduction"
BlucherFamily (Overland Park, KS)
Tamiya are reknowned for producing highly detailed models that are simple to build and most importantly, affordable. This kit is no exception. The build is fun and the result incredibly life like.
"1/48 German Heinkel HE162 A2 Salamander"
michaelkoons
This kit was extremely detailed and it was fun to build. The instructions were also very clear. This is my favorite model yet!

Following the Messerschmitt Me262, we release a second WWII German jet fighter with the Heinkel He162 Salamander. This truly innovative machine, which firmly established Germany as possessing the most advanced aviation technology of the time, deserves a high quality and richly detailed model to do it justice.

About the He162 Salamander

While the Heinkel company pioneered jet technology with its successful test flight on August 8th, 1938, it lost out to the Messerschmitt Me262 which became the first operational jet fighter. A second chance came in September 1944 when the Luftwaffe requested proposals for a single-engine jet fighter that was simple to control and produce. Heinkel½s proposal was chosen because it promised a mass producible jet that could be flown by relatively inexperienced pilots. Rushed from proposal stage to finished prototype in 3 months, the He162 was first deployed to a base near the Danish border, but with only 1 month left until the end of the war in Europe, came too late to demonstrate its combat potential.

Canopy may open and close. Ejector seat may be removed even after assembly

engine compartment pieces are included and may be switched freely even after assembly.

Engine may be displayed separately from plane mounted on a dolly