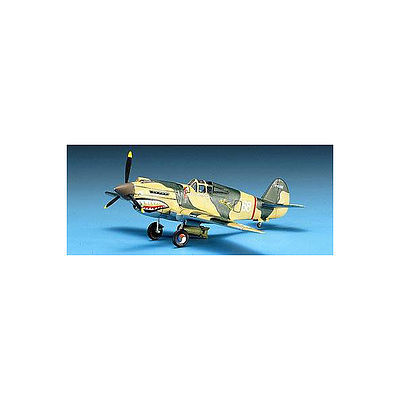 "No putty, but sanded instead."
Johnbycker (Wichita, KS)
This is a very good model. Considering the size & price; I would have to say this is a dog-gone good little model! Easy to build and the instructions came with 3 squadron variations and optional lander gear up or down. Very decent detail (again, considering the size). I would highly recommend this 1/72 scale. 5 1/4 x 6 1/8 (133mm x 157mm)

#54 in Plastic Model Airplanes 1/70-1/79 Scale
#145 in Plastic Model Airplanes
#1,081 in Plastic Models
"At least you can't beat the price."
clunymike
This is a great model if you want an easy quick build. I'd also recommend it to beginners, or youngsters who want the finished product to be something you can play with. The model is simple and sturdy, and doesn't have a lot of tiny parts to break off. That also means that there's not a lot of detail, but there are still nice panel lines and things. Probably the only real big complaint I have is the decals. As always, Academy decals are garbage. The only way I can get them to look half way decent is to wick extra thin glue under the decals after they've been placed and are dry. The glue will actually melt the decal and permanently fix it to the model, so be careful. Overall, it's a fine model if you just want to throw something together in a day or two.
"Good, but very basic"
fosk
Kit is from 1987 so its got a little age on it. Kit has 4 sprues molded in light gray and 1 clear sprue. Overall fit of the kit is not bad with the only problem area underneath where the wing meets the fuselage. Kit has engraved panel lines. Cockpit detail is really non-existent (decal for the instrument panel) which is fine since there is no option for an open canopy. The clear parts are a little thick but fit well. Options include a 500 lb. bomb or a fuel drop tank. Landing gear can be posed up or down. There are no paint call-outs either for the interior or exterior. Instructions have you use the picture on the box as a reference for painting. Decals, unfortunately, are typical Academy. Thick and non-responsive to most setting solutions. I used micro-sol, solva-set and even Tamiya X-20A, no effect. Some of the decals are a little out of register as well. With a little effort, it does make into a good little P-40. Really can't beat it for the price.
"P40b tomahawk"
wdhinds1968 (Oliver Springs Tn)
Good KIT PARTS fit well, detailed, propeller turns, nice little kit

One of the most familiar aircraft of the Second World War was the famous Curtiss P-40. Originally flown in 1938, the first P-40 was actually a modified P-36 using an inline Allison V12 engine instead of the P-36's bulky radial type. This modification gave the US Army a craft that could compete with a Hurricane or a Messerschmitt. These were the planes that would become known as the British Flying Tigers.