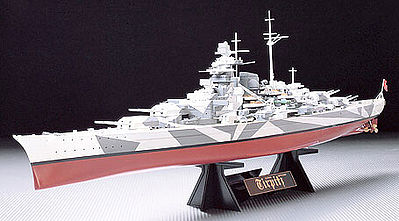 "Tamiya model review"
ant
5 star model. nice quality plastic parts. I thought the instructions were a litle vague but I suppose since I've been out of modeling for 20+ years I need to get my feet under me again. That could've just been me. I also bought the detail set..if they don't cooperate already, I'd like to see them coordinate a second instruction manual that incorporates the metal parts. Flipping between both manuals can be a little confusing.

Tirpitz was the second of two Bismarck-class battleships built for the German Kriegsmarine (War Navy) during World War II. Named after Grand Admiral Alfred von Tirpitz, the architect of the Kaiserliche Marine (Imperial Navy), the ship was laid down at the Kriegsmarinewerft Wilhelmshaven in November 1936 and her hull was launched two and a half years later. Work was completed in February 1941, when she was commissioned into the German fleet. Like her sister ship Bismarck, Tirpitz was armed with a main battery of eight 38-centimeter (15 in) guns in four twin turrets. After a series of wartime modifications she was 2,000 metric tons (2,000 long tons; 2,200 short tons) heavier than Bismarck.