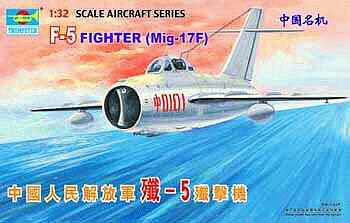 "mig17 good kit"
bigmac1959 (Sparks,Nv)
this kit is good for all levels of model builders has possibilities for after market parts

#37 in Plastic Model Airplanes 1/30-1/39 Scale
#402 in Plastic Model Airplanes
#2,243 in Plastic Models
"1/32 F5/Mig 17"
skippykeesler (Edwardsville ILL)
This is a model of the non-radar equipped Mig 17. This aircraft was used by North Vietnam during the Vietnam war it's most famous pilot being Maj. Tomb. The kit has nicely represented panel and rivet detail.Cockpit detail is sparce, and I use the Eudard Mig 17 photo-etch detail set. This consist of phot-etch details fot the cockpit(seat and instrument panel) landing gear doors and speed brakes. The fit is fair requiring a small amount of putty. The kit offers a highly detailed engine with afterburner and display stand.(engine dolly). Decals are good but again the only markings are for Chinese aircraft, so I ordered an aftermarket decal sheet that offers markings for North vitamese and Russian aircraft. Overall this is a good model of a historic aircraft.I recommend this kit.

F-5 fighter plane is the first kind of fighter plane that simulated with the Mig-17og the Russian that produced by China Shengyang Aircraft Company in 1956, mainly used for the air battle at daytime . The maximum speed is 1145KM/hour(0.99 Mach),the actual fighting height is 16000m , the weapon device is the same as the MiG-15. In February , 1958, Hu Chunsheng, Shu jicheng of P.L.A Air Force had ever shot the RB-57D air scout of KMT at height of 15000m and created the first record of shooting the enemy aircraft in the stratosphere in the world.