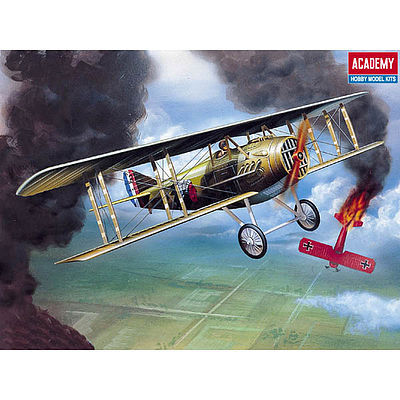 "This is a Great Beginner Kit."
undefined
This is a great beginners kit. There are better kits with more detail and decal options for the experienced modeler. I am not an experienced modeler. I find myself exploring a hobby I haven't done since I was a child. I see the great models some guys do and want to build kits like that, but I was just as clumsy at building it as I thought I would be. I received one of these for Christmas and I wasn't satisfied with my work, i.e. I made a lot of mistakes, but this kit is only a bit over $4 so I bought another one. All of the advanced techniques you use on expensive kits can be applied to this kit, it is nicely detailed, or so I think. These are great kits to learn on, even experienced modelers can use these kits to practice new techniques upon. For us newbies, there are painting techniques to master, there are decals to be applied, you can add your own rigging, you have work with small parts (my fingers are clumsy and I need the practice), and even have fit issues that will require you to step up and problem solve. All of these things are standard procedure for plastic models. I say practice on this kit and if you screw it up, so what? As for the plane the kit represents, it is a Spad XIII, a French built fighter noted for its ruggedness and speed. The decals show the markings of the 103rd Aero Squadron, which absorbed the pilots of the famous Escadrille de Lafayette (Lafayette Squandron) of the French Air Service, which were American volunteers flying for France, but who transferred to American service when the US entered the war. I don't know which pilot this plane belonged to, but a Spad VII with these markings appeared in a French newspaper article during the war. The 103rd replaced their Spad VIIs with Spad XIIIsand the pilots seemed to have kept their personal symbols pretty much intact on their new planes, but I was not able to verify a Spad XIII with these markings (only a Spad VII), but I was okay with that since I saw evidence of other pilots transferring their personal insignia over to their new planes. The insignia of the Escadrille Lafayette that came with them over to American service was and Indian chief in a war bonnet. It is not shown on the box, but there swastika decals as well, which despite their association with Nazi Germany, are ancient symbols used all over the world such as India, China, Japan, the Nordic countries, and even by Native Americans and American military units and It is still in use by religions in the Far East. Since there weren't any Nazis in WWI, it shouldn't be a problem if you are sensitive to their use, however if you chose to leave off these decals the model would still be accurate for this squadron.

#14 in Plastic Model Airplanes 1/70-1/79 Scale
#44 in Plastic Model Airplanes
#394 in Plastic Models
"I was expecting abit more of an easy build then this."
undefined
I recently did a Stopwith Camel , it did have some problems with the decals really not wanting to stick on plus the clear line. But other wise the Stopwith Camel was a decent model. When I was first making the model their were gaps, by the engine and were the machine guns would go on. The Wooden spars were the worst to get on the middle and farthest to the cockpit were easy to get on but the ones in the center didn't even fit in size sadly which that was a problem. The wings were hard to get on. As I said about the decals they had a clear yet visible line. When I was trying to get them on they weren't even sticking due to the surface of the model being metallic like parts (By that the structure of them) I wouldn't recommend this to beginner models but if you are more of an experienced model maker I would. Furthermore the price wasn't that bad but for it being difficult abit Its a good price though.
"SPAD"
undefined
In my opinion one of the most handsome fighters of WWI. I also really like the association to American Ace Frank Luke jr. who shot down 18 balloons or planes in 17 days in his service in the skies over Europe. Crash landing he refused to be captured and shot it out with the enemy being mortally wounded. This 20+ piecer is simple and easy. It goes together without any fuss and I thought looked great on completion.
"Good model for the price, but poor decals."
undefined
It's not an excuse, but this Nieuport WWI kit, is really small, and also, this one is really cheap to buy, taking in account all that, it's a nice model. Easy to build, and as it has very few parts, you can do it fast. The molding is OK, but some sanding needed. The decals in general are fine, but the big ones are a little transparent, so when placed over a dark scheme of paint, it shows a little, that there are different colors in the background. The model is a rather weak one, so be carefull when placing the strings. The model finished looks very fine, except for the decals issue.

The French built SPAD XIII was one of the most famous fighters of World War I. The SPAD used a liquid-cooled inline engine when most aircraft were equipped with rotary engines. A powerful and efficient craft, the SPAD was used for many years. Armed with one or two Vickers 7.65 mm machine guns firing through the propeller arc or a deadly 37mm Hotchkiss cannon, the SPAD was widely feared.