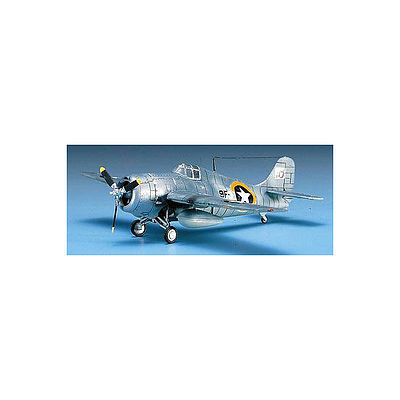 "The Wildcat"
woofdogmeow
This kit was an easy build the details on the fuselage are not the best but good enough. The model I built has the gear up. This was the part that worried me there is nothing to attach the wheels to when doing a wheels up model you have to glue the wheels to the sides of the wheel wells and don't push too hard when doing it or the wheels will fall in. My kit turned out fine and sits well on its stand.

#18 in Plastic Model Airplanes 1/70-1/79 Scale
#55 in Plastic Model Airplanes
#495 in Plastic Models
"Academy F4F-4 Wildcat"
william.messner49
This kit was an easy,fast build. The fit on the various parts was good and very little sanding was required. I didn't need to use any putty at all to fill gaps after assembly.There was no cockpit detail, but they would not be visible through a small canopy anyway. The landing gear was pretty good, but you can see right up into the fuselage interior when assembled with landing gear in open position. Overall, this is a good little kit for the price with good detail on the fuselage and wing surfaces.It would be an excellent kit for a beginner, without a lot of parts and not a lot of skill needed for assembly.
"Good kit for the price"
fosk
This is one of Academy's little box kits. These are very basic kits and generally go together with little fuss. The kit comes with 4 gray sprues and 1 clear sprue. Parts are nicely engraved with recessed panel lines. Detail is lacking especially in the cockpit. There is no instrument panel and the seat is just a slab with no detail. You have only have the choice of closed canopy which is fine since there is nothing to see anyway. Kit has the option for extended or retracted landing gear. The kit also comes with a stand for inflight posing which is a nice touch. Decals are typical Academy, very thick and require lots of coats of setting solution. Overall good representation of a Wildcat. Good price too.
"Good kit for the price"
wsmiddleton
Easy kit to build, no flash, good detail on the panel lines and rivets. There are some discrepancies between the model and the actual aircraft, however for the price not a major issue. There are larger scale, more detailed models out there if those things bother you. My son built it, and it served it's intended purpose of helping him build skills, and enjoy the hobby. I would recommend the kit for the novice builder. A beginner could build this, but they would need to be very patient and be careful with the small parts.

When the Japanese attacked the United States in 1941, the most modern fighter in the Navy was the Grumman F4F Wildcat. Although the Wildcat was small, it was not as fast or maneuverable as the Japanese Zero Fighter, but it was a very durable machine. However, in the hands of an experienced pilot, the Wildcat could best the feared Zero. Thankfully, the Grumman fighter was able to fend off the enemy until the more powerful Hellcat was available about one year later.