This is a plastic model kit of a 1/48 Scale Brewster B-339 Buffalo Pacific Theater Fighter by Tamiya. 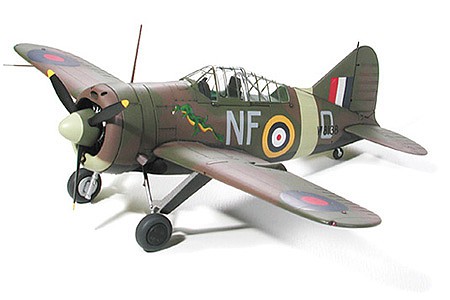 Following the release of a U.S. Navy version of the Brewster Buffalo in 1993, Tamiya now releases the B-339 export version of the Buffalo used by the Royal Air Force and Netherlands East Indies Army Air Corps during WWII. Kit comes with new parts such as canopy, propeller, seat and decals to accurately reproduce the Buffalo used throughout South East Asia. Also includes parts to reproduce the U.S. Navy version featuring gray fuselage.

About the Brewster B-339 Buffalo "Pacific Theater"

The Buffalo was first developed in 1935 as a U.S. Navy carrier based fighter. Featuring a modern mid-wing monoplane design with enclosed cockpit and retractable landing gear the first mass produced Buffalo was designated F2A-1, which was shortly followed by the improved F2A-2. Based on the U.S. Navy Buffalo, the B-339 Buffalo was for export only and was fitted with an export approved 1,100hp Wright Cyclone engine and redesigned for land use with navy equipment such as life raft and arrestor hook removed. The Royal Air Force (RAF) and the Netherlands East Indies Army Air Corps (ML-KNIL) used the B-339 to protect colonial outposts in Malaysia, Singapore and Java during WWII.

Includes a full range of accessories including two 100 pound bombs, one pilot figure sitting down and one figure standing, and markings to reproduce a choice of four different aircraft.