This is a plastic model kit of a 1/48 Scale P-47D Bubbletop Fighter Aircraft by Tamiya. 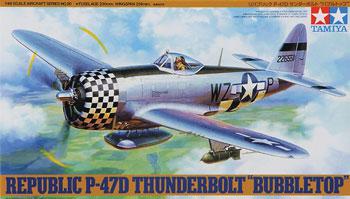 "Another Tamiya Masterpiece"
BlucherFamily (Overland Park, KS)
This is one of my favorite aircraft from WWII, and I have built the Revell kit before. The reason I bring up the Revell kit is this one from Tamiya is superior in almost every way possible. No over flash and parts come off their sprues cleanly with little if any cleanup required. The fit is also amazing, almost too perfect to believe and no puttying required. One of the key differences and surprisingly so, was parts on leading edge surfaces such as machine guns and radio masts were not molded in place but needed to be fitted. I was very impressed with that one little feature, as in handling wings and fusilage on other kits , protruding molded pieces like these can often be damaged or get broken off. The advantage of fitting them is that this can be done last after all the handling has been done and that is exactly how it should be. Once complete and painted this kit is remarkably life like, and the detail really does add to the realism. You will enjoy building this kit and enjoy the finished result even more.

#55 in Plastic Model Airplanes 1/40-1/49 Scale
#147 in Plastic Model Airplanes
#1,382 in Plastic Models
"Terrific Thunderbolt"
kajoe55 (Oklahoma)
I think very highly of Tamiya models. The P-47D Bubbletop is no exception to that rule. While this kit is engineered to an extremely high standard, and you sometimes think you could skip the glue because the parts fit so well together, there are some small issues which make this kit not for a beginner modeler. First, the cost is a bit high for learning. Second, Tamiya’s instructions require some experience putting models together and interpreting which version of parts goes with the model you are trying to assemble. Not that they aren’t good – it’s just a lot of information like part number, paint number, and letter identifiers like A, B, or C depending upon the variant. Third, this kit in particular has parts that fit like a glove. You must dry fit before putting glue to the parts or you risk ruining the surface. That said this is a fantastic model. No issues with assembly, limited to no gaps for filling, and nice weapons/external fuel tank choices. I was a bit disappointed with the decals, not that they aren’t good, just the choice of the subjects but you can find many other P-47D decals at HobbyLinc. The finished product is outstanding and I would think this kit, and Tamiya’s P-47 Razorback version, are the best in scale money can buy. I highly recommended this kit to all but very new modelers.
"Another great kit by Tamiya"
aj4grade
This kit is very well organized with plenty of configuration options for the builder to choose from. The checkerboard on the nose cowling is a nice option. This is a quality thunderbolt kit and one of the best Thunderbolt kits out there.
"Excellent engineering"
richardeller112 (Hoschton Ga. USA)
Another winner from Tamiya. Everything went together like a dream. This is a fun kit to put together

In May 1941, as the war raged in Europe, a single-engine fighter of more than 4t made its first flight. This fighter was the XP-47B, prototype of the Republic P-47 Thunderbolt of which a total of 15683 units will be built. Thanks to war experience, this aircraft was equipped with a 2000hp radial R-2800 engine, a supercharger and eight 12,7mm machine-guns. The XP-47B was to reach 633km/h and in January 1942, just after the USA went to war, the production of P-47B began. It was followed by the P-47C that incorporated various improvements and, from April 1943, by the P-47D, the most built version. The P-47D was equipped with an R-2800-59 engine, which can develop up to 2300hp with combat emergency water injection system engaged. The ducts that were passing on the sides and below the cockpit to connect the supercharger placed behind the pilot's seat gave to this plane its massive aspect. Many sub-types of the P-47D, designated D-1 to D-40, were produced but the first versions were called "Razorback" because of their sharp edge dorsal fin. The D-25 sub-type, which was introduced around June 1944, was fitted with an electrically actuated bubble canopy in order to improve pilot visibility and increased capacity fuel tanks. This decision resulted in a completely remodeled plane shape. All subsequent sub-types were also fitted with the bubble canopy and became a characteristic feature of late production Thunderbolts. The P-47 "Bubbletop" proved to be an excellent, well-balanced fighter-bomber.

This is the representation of P-47D late production that was nicknamed "Bubbletop".

The massive form of the plane, especially its belly and its cowling, has been accurately reproduced.

Flaps come as separate parts and can be attached in the up or down position.

Parts for replication of 3 types of mirrors, gun sights and 4 types of propellers are provided.

Engine cowling flaps and the intercooler air outlets on each side of the fuselage can be represented in the opened or closed position.

Parts for replication of 500-pound bombs, rocket launchers and 3 types of drop tanks are part of the kit.

A pilot figure and decals for two different markings are included.