This is a plastic model kit of a 1/32 Scale F-4E Phantom II by Tamiya. 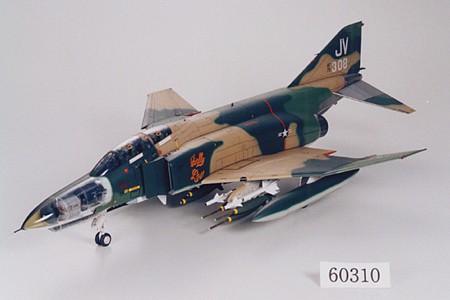 "Outstanding"
Blacktalon (Medford, OR)
This kit is really well put together. The F4 is an iconic weapon of Vietnam. I'm looking forward to building this amazing aircraft. Another fine model by Tamiya.

The F-4E came into production as an improved version of the F-4C/D and was to be the most advanced model of the Phantom series. After elongating the fighter's nose and installing a more compact radar, the solid-state Westinghouse AN/APQ-120, the installation of a nose-mounted gun became possible and a 20mm M61A1 6 barrel Vulcan gun pod was employed. The Vulcan 20mm cannon, with its ammunition drum of approximately 640 rounds, was capable of firing 4000-6000 rounds a minute and proved reliable in air-to-ground and close quarters aerial combat. F-4E made its first flight in June 1967 and entered the rising conflict of the Vietnam War in November 1968 when the first F-4E's reached Korat in Thailand and joined up with the 469th Tactical Fighter Squadron. By the time of the cease-fire of 1973 the F-4E was credited with a total of 21 MiG kills, 5 brought down by gunfire alone.