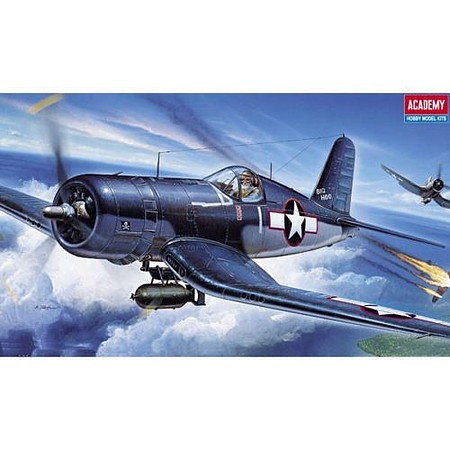 #41 in Plastic Model Airplanes 1/70-1/79 Scale
#113 in Plastic Model Airplanes
#892 in Plastic Models
"First Kit by Academy"
Oscar M
This is the first kit I have purchased made by Academy. I am getting back into the hobby after 30 years away. Overall fit and finish are good. Very pleased with the detail on such a small scale kit. I look forward to building more kits by Academy.
"Academy's Corsair"
rlsundquist
Academy consistently produces model kits that are easy and fun to build without sacrificing detail or accuracy. This Corsair kit is not the most detailed one available, but it is more than adequate; it also fits together beautifully and without any struggles. When I make a model kit I enjoy having plenty of pieces to actually glue together -- the point of the hobby is to build things, after all -- but I also like it when those pieces fit cleanly. The kit offers two canopies, a bomb or a drop tank, and two basic decal choices, which are not the most exciting options. However, I was pleasantly surprised when the decals performed as advertised, since I've had some unpleasant experiences with Academy decals in the past. Instructions are clear, the plastic is high quality, and ultimately it delivers a sturdy, solid little aircraft.

The F4U was designed in 1938 to meet the U.S. Navy's need for a high-speed carrier-based fighter. The governing principle behind the design of this plane was to place the largest possible engine in the smallest frame. This changed the possible landing gear configurations and ultimately resulted in the introduction of the inverted gullwing. While the plane proved to be unsuitable for carrier operation, it was used extensively in a land-based role.