Keep calm ... Hobby on. Please be patient during this time. We are open, but orders may be delayed unexpectedly.
> Plastic Models > Airplanes > 1/70-1/79 Scale : Revell-Germany Lancaster B.III Dambusters rvl04295

This is the 1/72 Scale Avro Lancaster "Dambusters" Plastic Model Kit by Revell. 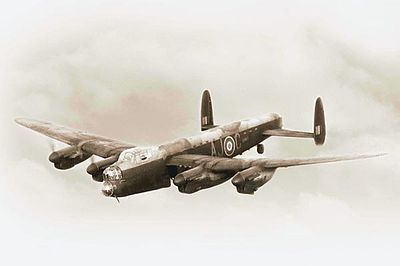 "20 0f 7000"
dbronso1
Compare this price with any other Avro Lancaster British bomber model kit. There were 7377 of these aircraft built from January 1941 until February 1946. Less than 20 of these were designed to destroy hydroelectric dams in Germany. This is THE collectors kit. It is one out of 7377 Lancasters built to carry the Bouncing Bomb to the brink of the dams. The redesigned under fuselages accommodated the warhead which was placed into a counter-spin by motors belt connected to the bombs. This mechanism prevented the bombs from bouncing disastrously into the aft section of the airframe, and also caused the bomb to sink upon contact with the dam before detonation. This kit truly is skill level 5. One gets a fully detailed cockpit and navigator/radio operator cabin with the kit. Wonderfully one also receives two 1640-horse power Rolls-Royce Merlin 24 inline piston engines with engine mounts to locate into two of the four nacelles. Landing gear and cubbies are detailed. The most difficult part of assembly was painting the camouflage design around the decommissioned passenger portholes.

#141 in Plastic Model Airplanes 1/70-1/79 Scale
#464 in Plastic Model Airplanes
#2,805 in Plastic Models
"good kit for the money"
wayne (Birmingham AL)
this kit built up into a nice ceiling hanger. it fits together pretty well, it is however a little over flashed. it builds up pretty big so I hung it up.
"Old nould with new parts"
jclemente1980 (Coimbra, Portugal)
First of all, I'd like to know why did someone posted pics of a shakleton on a lancaster review page... It is... Dumb or fraud to get points. It is not one or two, but several. So, I wouldn't say distraction but intention. So, for all of you, the pics it is not from a modifyed product, but of a totally different product. The shackleton was an old mould of a sub hunter airplane, while the lancaster was a night bomber, or modified to launch a depth charge to take down the dams... About this model kit: Some of you may remember a lancaster from Revell in the eighties... Well, this has nothing to do with it. The old one had raised panel lines, rough interior, and this one has a nice recessed panel lines and good interior. It is from 2007, which is nice. It has something I allways enjoy: you may put the engine cowlings out and leave the engine visible. When comparing it with the new Airfix Dambuster, I can only say to compare the price... In small details and precision, Airfix can be superior. But unless you take a magnifying glass to paint and to inspect, or if you have miopia and look at it really close, they will be very similar.