This is a plastic model kit of a 1/48 Scale Kawanishi N1K1 Kyofu by Tamiya. 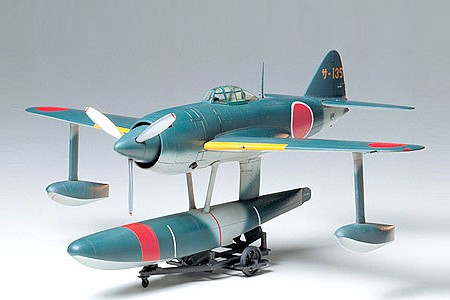 "Aleksandr"
semalevik (Russia)
Excellent model of tamiya. It's nice to collect, quality parts 5. Inner seams. Option can be an open cockpit, can be locked,

Just prior to the outbreak of the Pacific War, the imperial Japanese Naval Headquarters conceived a plan to trial produce a float plane fighter aircraft. This concept was without precedent, and was based upon the assumption that during the Japanese Combined Forces invasions of the Southern Island regions, close air support would be required to protect the invasion fleet and its landing personnel. This would be provided by floatplane fighters until the completion of airfields. These floatplane fighters would be stationed in the waterways and bays near the invaded and occupied areas, until arrival of land based aircraft.

In 1940 the Navy instructed Kawanishi Aircraft, who had prior experience in the development of superb floatplanes, to produce an aircraft to be known as the 15-shi floatplane fighter, Kawanishi designed and produced a large, single-seat midwing, floatplane of all metal construction. It had a large centerline float, and a small strut mounted outrigger float near each wing tip. It was powered by an excellent Mitsubishi Kasei radial engine and first flew in December 1943. It was designated the N1K1 Type 11 "Kyofu" and code named "Rex" by the allied forces during the war.

Although the Kyofu has been regarded as one of the most successful floatplane fighters to have ever been placed in operational service, it arrived too late to have any effect on the outcome of the pacific conflict.