The U.S. Navy heavy cruiser, Indianapolis, was commissioned at the Philadelphia Navy Yard on November 15, 1932. On the opening day of the Pacific War, December 7, 1941, as flagship of Scouting Force, US Fleet, she was making a simulated bombardment near Hawaii. In March 1943, she became flagship of Admiral Raymond Spruance, Commander Fifth Fleet which consisted of Task Force 58 plus 130,000 marines and army troops. Leading the giant fleet, she participated in most of the major Central Pacific campaigns. In March 1945, she was severely damaged and returned to Mare Island for repairs. For the 2 months period of repairs, her equipment was renewed and much improved with the latest radar, electronic gun sights and new Curtiss Seahawks. After the repairs, she loaded secret cargo and personnel at San Francisco, and sailed for Tinian Island on July 16 , where a B29 bomber base was located, , and arrived there to unload the cargo and personnel on July 26. Then 4 days later, on July 30, she sunk taking 2 torpedo hits from the submarine I-58. 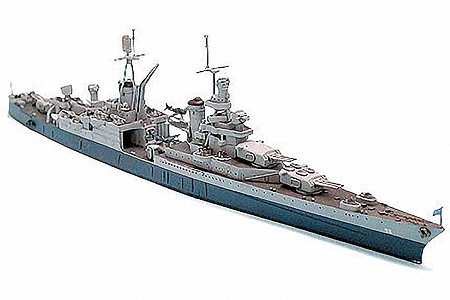 "Great kit to build"
cdnmodeller (Edmonton, AB)
This kit depicts the famous USS Indianapolis - the ship the carried the Hiroshima bomb to Tinian Island. It was 1 of 2 cruisers of its class, the other being USS Portland. This kit was pretty straightforward to assemble. The only problem I had, as with other kits, was removing & keeping track of some tiny parts. However, this kit's parts, even the smaller ones, were easier to apply and nothing a set of tweezers can't handle. As another reviewer said this kit is worth it for its association with 'Jaws' and the real-life mass shark attack that befell most of its crew after it was torpedoed by an IJN submarine and sank. Highly recommended.

#69 in Plastic Model Military Ships
#84 in Plastic Model Ships
#1,673 in Plastic Models
"Fun build"
Big â€œDâ€
I only had a few problems with some of the pieces lining up correctly but with time I finally made it work, just have to paint the finished model
"Great model to build"
mmegee616
Just completed the Indianapolis and enjoyed building it. The instructions are excellent and the parts are easy to identify. Even putting on the smaller AA weapons was not too much of a chore as I first installed the bases for the 5 inchers and 20mm's before attaching the guns. I pre-assembled the 40mm's before attaching though. The only real problem I had was the assembly of the forward mast as it broke so I had to make do with what I had to use. I used a different paint scheme also as I used the Model Master Navy Sea Blue for the decking and an intermediate gray for the hull. Assembly of the 2 scout planes always gives me trouble, especially with wing pontoons since they are so small. I painted the planes with a Navy Sea Blue and a light gray for the underside of the wings and pontoons. I stayed away from using any silver which the color chart shows for certain items such as searchlights and radar.
"Good model, not recommended though...personal preference."
ant
It's a nice quality model. I personally prefer full hull and bought this on a whim. weighted, no etched parts, easy to assemble. I would not recommend this or a waterline series (they are all not full hull) due to them not having a full hull. however the benefit of not needing a stand is nice also.

Keep small pieces and sharp edges away from children ages 3 and under.